The search for the UAE’s most outstanding businesses, entrepreneurs and business leaders has finally ended with the announcement of the winners of the inaugural Gulf Capital SMEinfo Awards.

The winners represent a diverse range of businesses from different commercial sectors which last year posted a combined turnover of over AED 100 million, highlighting a robust financial performance across the board. In addition, the winning SMEs recorded a 22 per cent average growth rate in the last two years, indicating consistent development and expansion even in the most challenging of business conditions. 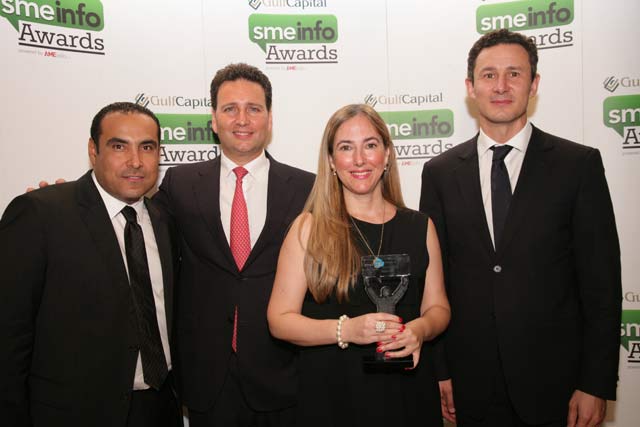 Bayt.com, the leading recruitment website in the Middle East and North Africa, won the Gulf Capital Business of the Year, impressing the judges with its strong financial performance and consistent growth, highlights of which include registering its eight-millionth member this year. Eastern Biotech & Life Sciences scooped the MasterCard Small Business of the Year award for its pioneering efforts in bringing cutting edge genetic technologies to the Middle East.

The RSA Start-up Business of the Year honour was awarded to Saluki Media, a boutique media production company that, within a year, has already produced over 50 TV commercials and 65 hours of international broadcast television; and has also recently signed a $1.5 million deal for an Arabic reality TV show.

CIRTA Electro Mechanical Maintenance is this year’s best among Emirati-owned businesses, taking home the Emirati Business of the Year award for having successfully grown its business that is now recognised as a pioneer in the distribution and implementation of underground technology systems such as underground street lighting cabinets and polycarbonate manholes in the UAE and Qatar.
Meanwhile, Cobone.com secured the distinction of being the best web-based business – accumulating over 1.5 million customers since it launched and facilitating over 100,000 transactions a month – by winning the Online Business of the Year award.

“Based solely on achievement and performance, this year’s winners represent the cream of the crop of SMEs operating in the UAE. In adopting best business practices and an unwavering commitment to deliver on their visions and missions, these companies have achieved remarkable business growth and contributed significantly to the development of the larger UAE economy; and as such, deserve to be recognised,” said Becky Crayman, Head of Awards, Gulf Capital SMEinfo Awards.

The hotly contested Entrepreneur of the Year award was given to Prabissh Thomas, owner of PTL Solar, which has been providing and promoting world class energy-efficient and reliable solar energy solutions in the Middle East and Africa. The Business Leader of the Year award was bestowed on Lama Bazzari, Founder and CEO of NStyle International, the company behind NStyle Nail Lounge and Urban Male Lounge – two premium-grooming concept salons which service no less than 40,000 customers every month across 17 regional branches.

Dr. Karim El Solh, Chief Executive Officer of Gulf Capital, the leading alternative investment firm in the Middle East and the headline sponsor of the awards, congratulated the winners and encouraged them to continue aspiring for excellence. “Out of the highly competitive selection and judging process emerged outstanding businesses as well as admirable entrepreneurs and business leaders worthy of recognition. We take our hats off to their inspiring accomplishments and hope for their continued success,” he added.

PTL Solar won a second award for Sustainable Initiative of the Year for spearheading efforts to provide and promote energy-efficient power solutions among businesses in the region. Wild Guanabana secured the Customer Focus of the Year award for consistently providing personalised, creative and adventure travel experiences that clients have found to be safe, fun and professionally managed.

Popular F&B concept Just Falafel was the unanimous choice for Business Innovation of the Year for starting and continuing a falafel revolution that enabled them to take their brand and delicious falafel to nine countries across the Middle East and expand internationally. Finally, Bayt.com made it a double celebration by winning the People & Culture of the Year award for proactively serving more than eight million job-seeking customers and over 40,000 companies, helping them successfully attract and recruit professionals and executives every day..

Winners of the first Gulf Capital SMEinfo Awards were chosen by a panel of regional business trailblazers, SME enablers from the government, and highly respected members of the UAE business community. The recognition programme is one of the core initiatives of SMEinfo.me – a digital community for UAE start-ups and SMEs that seek to drive the growth of entrepreneurship in the UAE; and is endorsed by Dubai SME and the Khalifa Fund for Enterprise Development.